The story of the Red Velvet Cheesecake

A famous unnamed cheesecake company offers a Red Velvet Cheesecake on their menu. It hit the scene around 2010-ish, along with the “Red Velvet” craze. I wondered how it was; after all, they were THE cheesecake folks (even though I think their chocolate cake is better than the cheesecake), I digress. Those that know me and my tastes, often told me….”You’re not gonna like it.” Not one to have a second-hand opinion, I had to see for myself. I don’t discriminate when it comes to others desserts, surely there’d be something about it I liked. Spoiler alert- no!

So, one late fall evening I made the trek out to the restaurant after leaving the salon. I got cozy in the parking lot, with a fork and cheesecake in my lap. I was ready to dig in right there. Halfway through, I was a little Po'd, and felt like I had totally wasted a good 1000 calories. I would have been much happier if I would have just went home and bake some of my famous Oatmeal Chocolate Chip Cookies. I didn’t even finish the rest. It was just a mouth full of sugar with no balance. On top of that, it WAS NOT a Red Velvet Cheesecake, it was a "Red Velvet Dessert". The dessert was a layer of traditional cheesecake a thick layer of frosting, a layer of red velvet cake, repeated for a couple layers. No Bueno! I felt a little set up, this was not what I would envision when you say Red Velvet Cheesecake. I’m a literal person, if you tell me you have a Red Velvet Cheesecake, I need to see a creamy Red Velvet custard, not cake. (shrug) But, that’s me. So, I left that parking lot really wanting a “real” Red Velvet Cheesecake. I couldn’t find one in town; Ok, I really didn’t look to be honest.

Still wanting to taste one, being the person I am, I decided to bake it myself. I had never made a cheesecake before in my life. Really wasn’t a huge cheesecake or Red Velvet fan. I couldn’t shake the urge though. For over a month I researched cheesecakes and their chemistry. Reading all I could about the dos and don’ts of making what I always assumed was a temperamental dessert. I finally crafted my own special recipe and decided to try it for my personal Thanksgiving dessert. Wouldn’t you know it….the first cheesecake came aesthetically perfect- no cracks, easily released it from the plate! As for taste, it was not bad at all- pretty doggone good if I must say so myself.

Each day, I kept going back for a little sliver here, a little slither there to make sure what I was tasting was right. By day 3, I was nixing errands to hurry home to eat another slice. Still a bit unsure as to whether or not it was a hit, when I realized that by day 3 I had ate over half of a 9” cheesecake by myself. I called that good! I was at my height of training and wasn’t even eating sweets at all. That cheesecake was so good. I had zero remorse and by day 4, I finished the whole thing! (I did share 2 slices….just 2). I DID NOT tell my trainer I ate dang near a whole cheesecake since the last time I saw him.

I only made one tweak to the recipe for texture purposes and after that, it officially became a staple of my baking business. A client of mine actually ordered one when I made my first one. I said, “I’ve never made it before! I’m not sure how it’s gonna come out.” She replied, “I’m not worried, everything you make is good. I’ll take one.” No pressure! Even without the perfect texture, that cheesecake quickly disappeared on their holiday table! I was more than convinced that the cheesecake would wow a many of folks and the reception to the cheesecake for all these years has not proved me wrong.

The original recipe I came up with is the recipe I use today and the recipe that is a part of Crush Sweets’ DIY Red Velvet Cheesecake Kit! So, yes, the kit is the real deal- not a knock off version of my Red Velvet Cheesecake. I look forward to hearing more stories of the great disappearing cheesecake. Wonder what I’d be doing now if I never took myself out for that slice of “Red Velvet dessert”? We’ll never know. 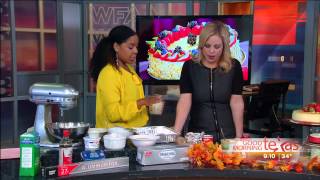 The story of the Red Velvet Cheesecake